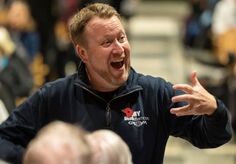 The NEW Churchdown (N.Glos) Good Afternoon Choir will meet every Tuesday afternoon from 1pm - 3pm at Churchdown Community Association, GL3 2JH starting Tuesday 7th February 2023. There is NO charge for attending your first rehearsal, when membership information will be available. Choir rehearsals are in 4 terms of 10 weeks and members pay £54 per term, this covers all room and piano hire, music, admin and the musician fees. You do not need to join at the start of a term, you can simply come along to any rehearsal and pick up a members form should you wish to join the choir - your fee will then be worked out for the remainder of that term.

Grenville Jones, the founder of the Good Afternoon Choirs is delighted that his son Laurie Jones (pictured) is the Leader.

Laurie is the youngest son of Founder and conductor Grenville Jones. He has 20 years experience working as a professional musician and has gained degrees in both percussion and classical singing studies. He started his musical career as a freelance performer and teacher establishing himself in the South West.  He has performed in some of the UK’s most prestigious venues and London’s West End. In 2008 Laurie decided to change his career and go into secondary education as a Music teacher. He was Head of Music at Abbeywood Community school for 6 years and is now Director of Music at Westonbirt Senior School. He has always had a passion for singing and he started to conduct choirs ten years ago working with Youth Choirs in schools and colleges and is the founder of award winning Malmesbury Choir and is Assistant Director for the City of Bath Male Choir.

There are no auditions and everyone is welcome. Many of the people across our Good Afternoon Choirs have never sung in a choir before. Over 1,000 people now sing in the Afternoons!
​
The Churchdown (N.Glos) GAC enjoys all sorts of music – from folk songs to choral favourites. If you have any questions about the Choir please contact Tracey or Jody at Grenville's office in Westfield/ Midsomer Norton for any information, by calling 01761 472468 or emailing gac@grenvillemusic.co.uk - or just come along to your first free session with a friend of course!
REHEARSAL DATES