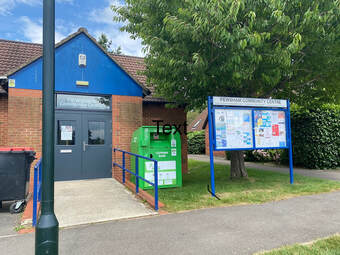 Leader - Matt Finch
The NEW Chippenham & Calne Good Afternoon Choir will start on Tuesday September 6th at Pewsham Community Centre Association  on Lodge Road, Pewsham from 1-3pm. Come along and find out what it's like to sing in a Good Afternoon Choir. Everyone is welcome!

The choir will then rehearse EVERY TUESDAY from 1-3pm with conductor, Matt Finch. There are NO auditions and everyone is welcome!

​There is NO charge for attending the first rehearsal and membership information is always available. Choir rehearsals are in 4 terms of 10 weeks and members pay £50 per term, this covers all room and piano hire, music, admin and the musician fees. You do not need to join at the start of a term, you can simply come along to any rehearsal and pick up a members form should you wish to join the choir - your fee will then be worked out for the remainder of that term.

Matt Finch (pictured) is one of the area’s leading musicians, well known as MD for Bath Light Operatic Group. Matt already leads the South Gloucestershire and Frome Good Afternoon Choirs, supported by the Choir’s Project Leader and Founder ‘Bath’s Mr Music’ Grenville Jones.. Matt loves singing, rehearsing choirs and playing the piano.  He has been Musical Director of Bath Light Operatic Group for over 20 years, so you may have seen the back of his head in the orchestra pit of the Theatre Royal Bath!

Over 1,000 people now sing with us in the Afternoons!

The Chippenham and Calne Good Afternoon Choir will enjoy all sorts of music – from folk songs to choral favourites. If you have any
questions about the Choir please contact Tracey at Grenville's office in Westfield/Midsomer Norton for any information, by calling 01761 472468 or emailing gac@grenvillemusic.co.uk - or just come along to your first free session with a friend of course! Concerts will soon be announced.