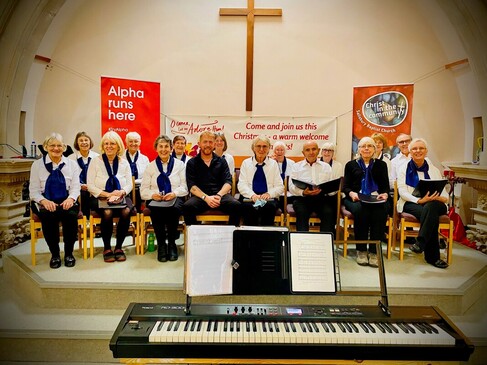 Salisbury GAC held their first concert in December 2021 with an open carol concert.
​The concert raised a wonderful £178 for their chosen charity. Our picture shows the choir getting ready to perform!
Come along and meet Katy, our conductor and Tanya our accompanist and ‘discover’ great music, with NO CHARGE to attend the first rehearsal. Thousands sing in our 19 Good Afternoon Choirs across the West. There will be music, fun and concerts with special events and visits.

Katy Horner leads the choir and our founder is Grenville Jones. We meet every Friday afternoon from 1pm - 3pm at SALISBURY BAPTIST CHURCH. There is NO CHARGE for attending your first rehearsal and membership information is then available. COME ALONG WITH A Friend. Choir rehearsals are in 4 terms of 10weeks and members pay £50 per term, this covers all room and piano hire, music, admin and the musician fees.

here are NO AUDITIONS and everyone is welcome.

The choirs support local charities, chosen by the choir members. Some of you may recognise Grenville who founded the Good Afternoon Choirs 11 years ago. He’s been seen on TV and Radio many times for his choir leaderships AND as founder of the Golden-Oldies Charity

You will be joining over 1000 people Singing in the Afternoons! The Salisbury Good Afternoon Choir will be enjoying all sorts of music – from folk songs to choral favourites. If you have any questions about the Choir please contact Jody at Grenville's office by calling 01761 472468 or emailing gac@grenvillemusic.co.uk - or just come along to your first free session, with a friend of course!